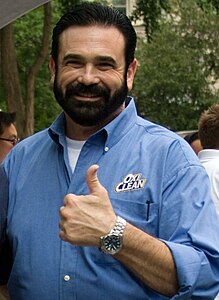 William Darrell Mays Jr. (July 20, 1958 – June 28, 2009) was an American television direct-response advertisement salesperson. Throughout his career, he promoted a wide variety of products, including OxiClean, Orange Glo, Kaboom, and Zorbeez. His promotions aired mostly on the Home Shopping Network through his company, Mays Promotions, Inc although they aired on various other syndicated networks. Mays and his business partner, Anthony Sullivan, were also featured on PitchMen, a Discovery Channel television series that documented their work. His distinctive beard, attire, and impassioned sales pitches made him a recognized television presence in the United States and Canada.